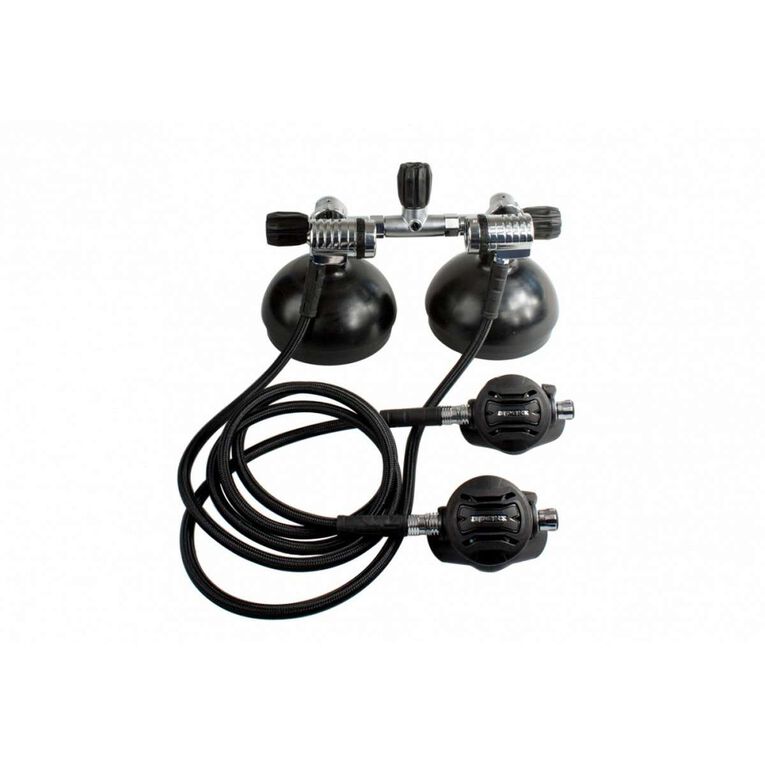 Back In Stock Notification

The TEK3 utilises all of the proven technology contained within the Apeks range of first stage regulators . The ports on the TEK3 first stages are oriented so that all hoses will route downward to provide the streamlined configuration required by technical divers. Allows unrestricted accessibility to the cylinder valves when using a twin cylinder set up. Features an innovative Diver Changeable Exhaust system (DCE). The system gives the diver the ability to change from a small exhaust tee to a large exhaust tee. This gives the user a choice, wider exhaust tee for minimal bubble interference (essential for underwater photography) and narrow exhaust tee for a smaller compact comfortable regulator. The regulator is supplied with both sets of exhaust tees. The second stages can be converted from a right-handed hose configuration to a left-handed configuration. The process of changing the regulator to a left-handed configuration is both quick and simple. However this procedure must ONLY be performed by an APEKS Authorised Service Technician. Available with DIN connection only. Outstanding cold water performance (below 10 C / 50 F). Compatible with EAN40 out of the box.

What’s in the box

First Stage:Compact, solid one-piece bodyUnique over-balanced, diaphragm design - as the diver descends, the over-balancing feature allows the medium pressure gas in the hose to increase at a rate faster than ambient. This results in superior performance at depth.1 HP port and 3 MP ports are all angled downward.An environmental dry system keeps water out of the main spring chamber thus preventing ice buildup and keeping silt and contamination out.Maximum working pressure is 300 BAR (4350 psi).
Second StagePneumatically-balanced second stage results in smooth, easy breathing.The XTX purge buttons are large and easy to operate. A 2-stage progressive purge is used - press the purge on the side for a lower flow rate, useful where more control is required such as filling lift bags etc, then press in the centre for the full effect of the purge, i.e. when regulator clearing etc.The large venturi lever has a soft touch rubber grip, which makes it easier to locate and use. The lever reduces the amount of grit ingress and therefore resists any possible friction giving a smooth operation.Easy-to-grip opening effort control knob keeps the diver in control.The second stage is manufactured with active protection against infection as all molded parts are produced with an additive that kills MRSA, protects against E-Coli, bacteria and fungi, and is also very effective against viruses, mould, yeast and algae.A silicone exhaust valve improves the breathing performance of the regulator.The Comfo-bite™ mouthpiece virtually eliminates jaw-fatigue.A heat exchanger (patented) which surrounds the valve mechanism, dissipates the cold caused by gas expansion while drawing in the warmth of the ambient water.